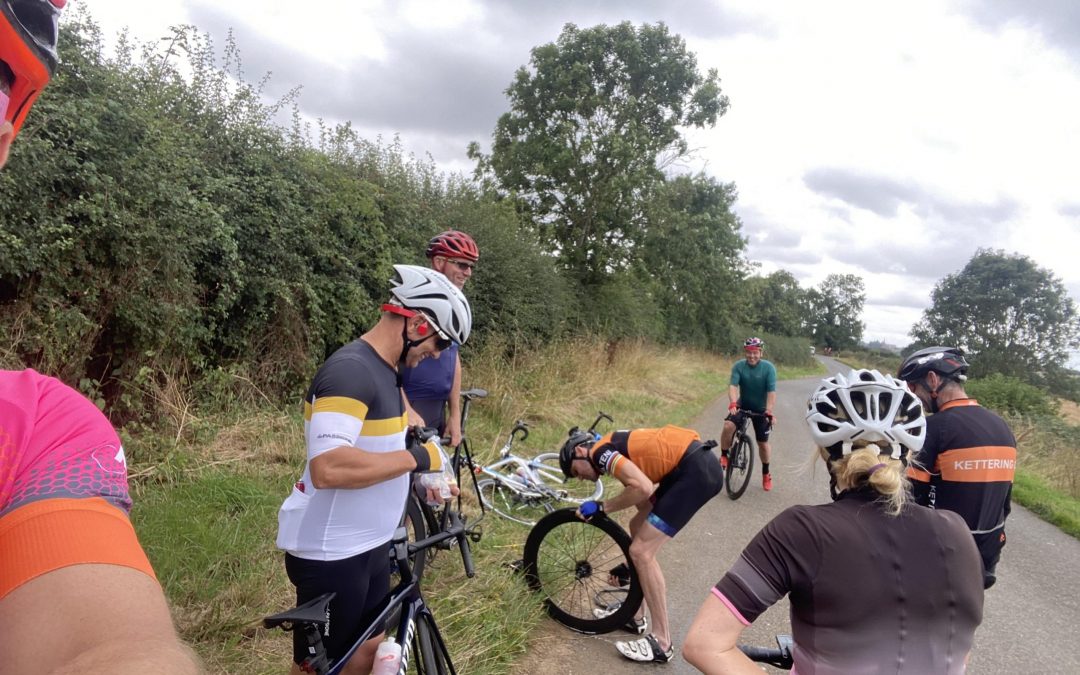 On Sunday, 29th August, a couple of new faces met the usual riders at the bus stop outside Sainsbury’s.  Bumble Davis, getting in her last ride before setting off on the Deloitte Land’s End to John O’Groats event this week, and David Blakeborough joined another 8 riders.  Sadly, Andrea Wollcott was not with us this week as Bumble wanted to meet KCCs Strava Queen of the Mountains expert to draw inspiration for the LEJOG challenge.

With the route out of Kettering hitting an early leg tester thanks to Warkton hill and then Thrapston’s punchy little incline, signs of fragmentation in the group became apparent.

Bumble joined Eddie Smith, Mike Castelete, Steve Wong, Haythem Rashed, Barry Marlow and Ian Callaghan in pushing on at a rapid pace whilst Ian Bird and I (Andy Parker) worked with David as he got used to the pace.

Heading north into a blustery head wind, the groups made good progress before starting to head west after Oundle, up to the water tower at Southwick and across the A43 at Bullwick.

After working hard for 20 miles or so, David turned back to Kettering leaving Ian and me to start a “two up” intense effort to get somewhere near the larger group.  We didn’t meet them until they were at the front of the coffee queue at Harringworth’s Spokes outdoor café but I did manage 12 Strava PRs on that section of the ride and needed a large slice of chocolate fudge cake with my tea.

After the coffee stop, there were a few hills thrown in to spice up the ride – the first up to Seaton always gets the lactic burning in the quads and the punchy rise from Lyddington towards Stoke Dry added a little more pain to the aching legs.  A puncture break for Eddie slowed progress for a short while but the effort continued immediately after.

The run towards Kettering was wind assisted as the northerly breeze pushed us home.  Average speeds for the quick guys were just shy of 30 kmph (18.5 mph) with over 900 metres of climbing.

The “two-up” effort with Ian did lead to me managing 12 Strava PRs and I needed a large slice of chocolate fudge cake with my tea when we got to Spokes!