It’s summer… will it or won’t it rain? 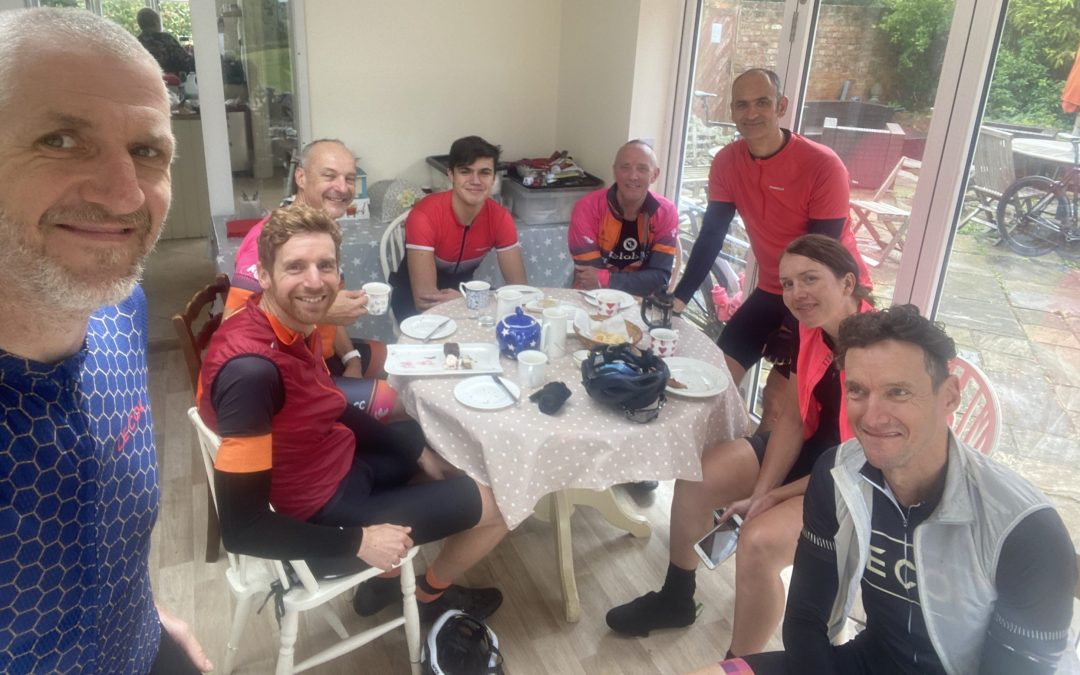 Setting out for the 9:00 am rendez-vous at Sainsbury’s bus stop on the Rockingham Road,  Kettering, I debated whether I should put on the new brightly coloured KCC rain jacket. It was warm but it felt like there would be rain. At the bus stop, meeting eight other riders I put on the jacket but took it off again as the rain held off.

Setting out through Pytchley I realised that with drizzle in the air, I was too late to change my mind and put back on the jacket – my clothes were already damp and they would stay that way regardless of whether I wore the jacket or not. Fortunately, despite a stiff and blustery south-westerly breeze, it was still warm.

The group fractured a little and regrouped through Moulton and again splintered up the rough surface of Sandy Lane into Chapel Brampton. A couple of groups formed around the back of the beautiful Althorp estate and up the hills towards Guilsborough.

The plan had been to stop at the Centre for World Peace in Thornby (the Buddhist Centre) but they had a large event taking place so we pushed on another couple of miles to Naseby and a favourite haunt of ours at the Old Vicarage. On International Cats day, Andrea took great delight in stroking the tabby, cat-napping in a box in the corner whilst we were treated to the usual feast of cake assortments and endless tea and coffee.

Rather than the conventional route home through Kelmarsh, I put in a diversion through Cottesbrooke and Brixworth (in case 1,000m of climbing was not enough) then a gentle jaunt back through Loddington to Kettering.

It was great to see another new rider – with 17 bikes he’s renovated in his garage, Rhys could be a really useful guy to know!