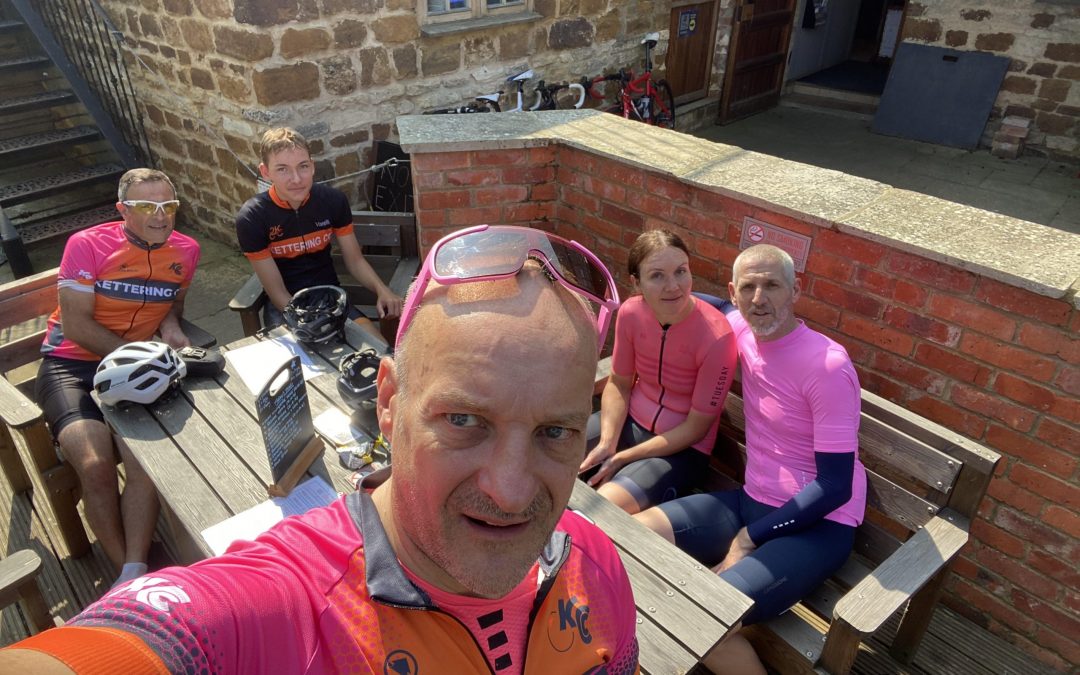 You’ll take your eye out with that!

Another eventful KCC Training ride took place on Sunday 5th September as both Social and Training ride groups met at Sainsbury’s at 9am.

The usual Training Ride gang was joined by a very talented young rider, Lucas Buksch,  who normally rides with the Social Group.

Heading out through Pytchley from Kettering, that first hill started to create some gaps, which were exacerbated climbing into Orlingbury, Little Harrowden and then along the Moonshine Gap to Mears Ashby where the group regathered itself.

On the steep climb into Castle Ashby and then the transit to Easton Maudit, bigger gaps formed and two groups resulted.  One with Andrea Woolcott and Darren Gillings pushing a relentless pace, consisted also of Lucas Buksh, Iain Callaghan, Mike Castelete and Jon Thorne; whilst a more leisure ride was enjoyed by Steve Webster, Mark Brockway and Andy Parker.

The route took in two or three stretches of the beautiful black stuff – freshly laid tarmac, most notably on Dungee Hill from Bozeat to Poddington which had previously potholes you could hide elephants in to test the best of riders evasive skills.

When we all regrouped at the Watermill near Ringstead, the Social riders were heading off.  However, long queues had formed trying to enter.  Seated, eventually with a clear line of sight to our bikes, we enjoyed the beautiful sunshine…for about 45 minutes until an order was taken.

This gave enough time for us to try to work out why Iain Callaghan had a hole in his cheek.  Darren explained that, in trying to help with his CO2 canister it’s valve had shot back into Iain’s face.  Another good reason for cyclists to always wear good sun-glasses. Mending punctures could have your eye out.

The ride was for me to ride over 90 km at an average speed over 17mph.

The ride was for me to ride over 90 km at an average speed over 17mph.

Andy
Our next event