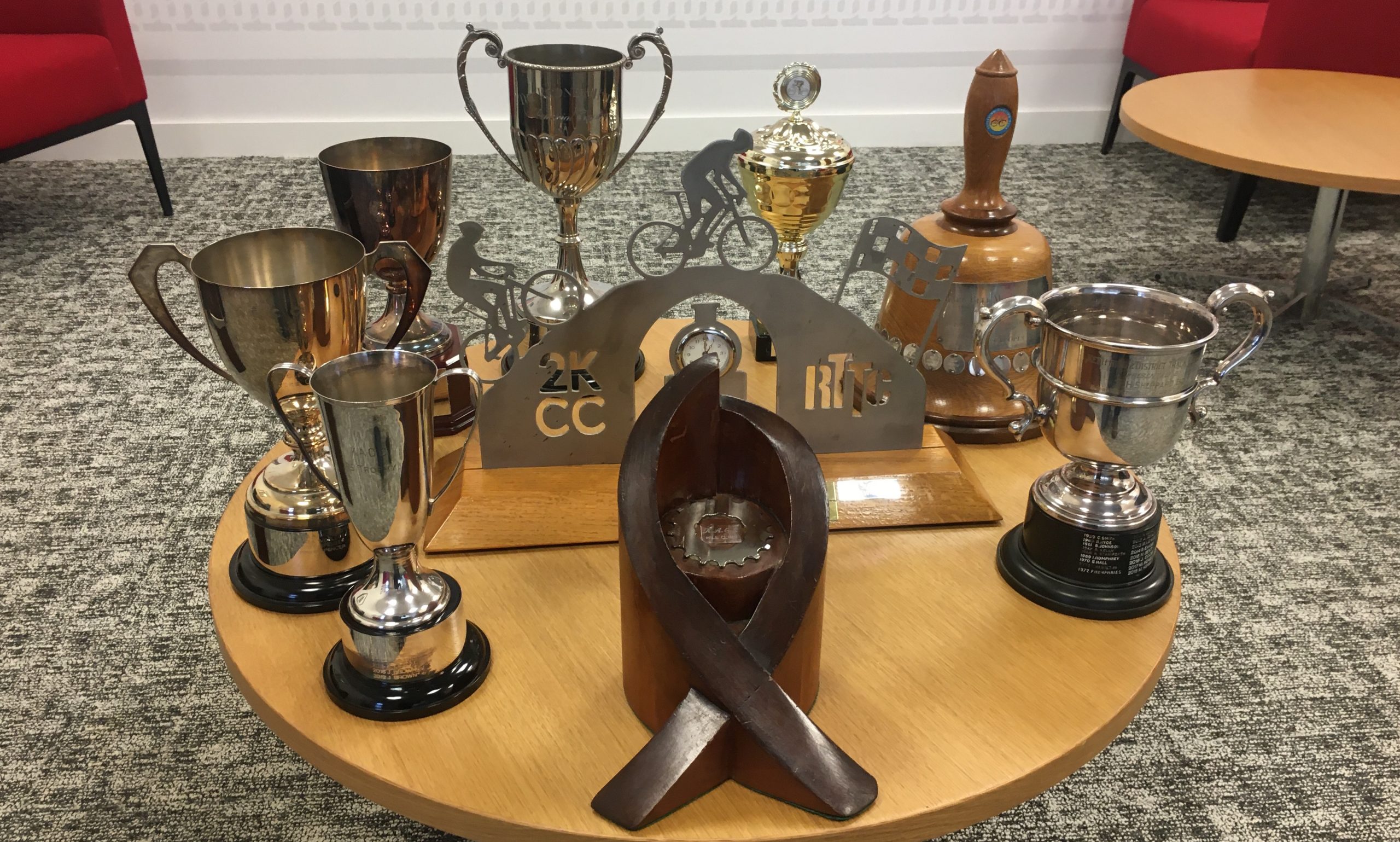 The club has not taken the unwelcome spare time for granted and in its 21st year has produced a sparkly new website, a new logo and a stunning new kit design (more of which later).

It is perfectly appropriate that the club should recognise the immense contribution that Marcus Buksh has made to the progress of the club during his stewardship as club chairman and so we extend our sincerest gratitude to him for his service over the last 5 years as he handed the baton over to our new chairman Andy King.

Sue Rust did a sterling job of coordinating the Mark Bell Hilly this year and Jon Thorne and his team of merry marshalls and timekeepers squeezed in a socially distanced series of time trials.

Ian Bird made sure that anyone who turned up on a club run grouped into 6 safe riders and although the club runners remained Covid free you cannot prepare for the wanton destruction that a random rabbit can wreak.

Under the initiative of Marcus the club trialed a new steady ride once every month to introduce new club runners to come along and this saw the number of riders out on a Sunday run increase with lots of positive feedback about the new format.

The restrictions on normal everyday life meant that more and more people recognised the benefits of exercise and particularly cycling.

People on furlough took to two wheels in their thousands and racked up hundreds or more miles and improved the speed over which they covered them.

Josh Brown and Eddie Hennah represented KCC in the National Hill Climb Championships which had 399 competitors this year and both allowed us a glimpse of their future star potential and did the club proud.

In 2019 Josh won the 75 Trophy for best junior road race performance and has announced that he has been selected to ride for the Tofauti Everyone Active Junior cycling team in 2021; the club wishes Josh all the best for the future and expresses gratitude for showing the juniors just what can be achieved with talent and total commitment.

All in all we managed to make the best of a rum lot and kept ourselves busy.

The Mark Bell Hilly is held every year in memory of Mark Bell and is the opening event of the year. It is a challenging 20 mile circuit with one or two nuggets in to really test the legs and is attended by riders from all over the country.

The club is extremely grateful to Sue for stepping in and organising the ride and hope that she will run the next one when it is safe to do so.

Danny Metherell deserves a mention for snapping at their heels.

The Time triallists squeezed in only one ride before the first lockdown and then had a four month wait before the next time trial. Thankfully Jon and his crew managed to hold 9 more races before the end of the season.

Tony Brown was clearly not resting on his laurels after sweeping the board last year and once again Mr Consistent takes home the Butterworth Cup for being the 10m male TT championship winner, The Jim Aveling points series Male and the Ray Panter Memorial Trophy for the male veterans point series winner.

Sue Rust somehow crammed in some speedy miles too despite all the other demands the club placed on her and retained the Loveder Memorial Trophy for the most ladies points.

Lindsay Scott joined KCC in 2019 and, as well as providing stiff competition for Sue she quickly showed her credentials by nabbing the Hankins Ladies Trophy for the 10m TT Championship on 30th July 2020.

In her last year as a junior competitor Amy Bird showed that she will be giving the senior ladies a reason to look over their shoulder in 2021 and deservedly wins the Ian Bailey Memorial Plate for the best Junior Time Triallist.

Amy also extended her repertoire by participating in road racing in Oxfordshire and locally. On the punishing Southwick circuit she came 2nd of the ladies and 38th overall. Amy picks up the 75 Trophy for the best junior road race performance.

More success in our paddock of riders

In what was a much shortened road race season Andrew Furbs Fairley had 2 results in the Spring Handicaps and so wins The Lesley Smart Cup as our Senior Road Race champion.

Andy King made the most of the lovely weather to get the miles in and, as well as winning the coveted Bob Hill Road Bike Trophy, Andy also wins the Sportive Trophy for the most miles covered by a KCC rider according to Strava with 10,031 miles, 453,031 ft of climbing, and 274 rides totalling 595 hours!

Andy King also turned the clock back 30 years and returned to the track in January 2020 in the Derby Track League.

Track cycling can be immensely exciting, a great place to hone cycling skills and racing strategy . The following summary of Andy’s exploits should whet the appetite of anyone wanting to give it a try.

Each week’s racing consists of 4 races for each of the 4 categories of racing. In each group there are points awarded to the top 8 riders in each race with each group getting a different number of points for those places so Group 1 winners get more points than Group 2 who get more than 3 etc.

Sporting his KCC skinsuit in his first evening of races he improved from 4th to 3rd to second and then won the mystery scratch race.

Andy started off in Group 4 being the most consistent rider for the first 2 weeks, had a poor night on the 3rd week and then won all 4 races on the 4th week which got him promoted to Group 3 which, understandably, he was quite pleased with.

He then missed weeks 5 and 6 (in which Harry Tanfield of AG2R La Mondiale made an appearance in Group 1) whilst he was away training and started his first Group 3 race on week 7 with a little bit of trepidation.

That week there was full field of 26 riders so, while the races weren’t that much quicker than some of the Group 4 races he’d grown accustomed to, there were a lot fewer gaps to slot into and he found himself out of position more often than he would have liked.

He still managed to get in the points on the evening so left quite happy and determined to do a little better the following week. On week 8 he did do better in 3 of the 4 races, getting a 3rd, a 4th and a 5th, but made a mess of the Elimination race after letting himself get into a bad position on the track quite early on.

Unfortunately he was unwell on week 9 so didn’t race at all and unfortunately week 10 did not happen.

So after all of the racing he found himself sitting at 5th in the points table in Group 3.

If you would like to give it a go and want some more info please email Andy King.

Rounding off the TT season

The Frank and Joy Sheppard is the season closing ‘open’ and was clearly at risk in 2020 with lockdown and tier restrictions looming but thankfully, after being cancelled in 2019, the event managed to take place under covid restrictions.

Whilst there was no awards handed out on the day and handshaking, cheering, backslapping, clapping and hugging were ruled out, that did not stop every rider putting in maximum effort.

Most notable of these was the 25m50s posted by Eddy Clutton who improved on his circuit time from 2018 by a massive 1m27s and so Eddy picks up the Frank Sheppard Cup for the most improved rider.

Every year the committee cogitates and deliberates to nominate one person who they feel has contributed to the club in an outstanding way. It might not just be over the past year it could be judged over a number of years. This year there was only ever going to be one clear winner.

Sue Rust
It cannot be overstated that Sue has put her heart and soul into the club’s activities over the years and has encouraged and inspired everyone in the club (and not just the female members).

There is no end to her talents and this year she designed, tweaked, reimagined and then tweaked again the clubs new website and spent endless hours fine tuning the designs for the clubs new kit and the club’s new logo.

This was no mean feat given the scrutiny that each stage travelled through with the committee and then the club.

Somehow she also managed to fit in time trialling as well (and also a full time job, exercising her dogs, visiting the coast when permitted!!)
Sue is the deserved recipient of this years’ merit award.

Traditionally the Off Road season is taking place in winter and, because the club award presentations are normally held at the end of the year, the winner of the KCC Off Road Trophy is not given until the following year and Garry Carter was obviously inspired by his son Jackson to add to the family trophy cabinet and after a tremendous effort in the 2019/20 cross season collects the KCC Off Road trophy.

The Rodney Hyde Memorial Trophy goes to the person who has attended the most club runs and this year Stephen Webster has managed to not only improve the speed that he can cover distance in but has also been the most regular person on the Sunday runs.

The Cyclones enjoyed every opportunity to improve their cycling skills and this was clearly evident when some of them joined Marcus’ steady club run in the summer.

Their bike handling skills, confidence and overall awareness of what was going on around them proved how invaluable the knowledge learned with the Cyclones can be and the club once again expresses their gratitude to Victoria and her team for not letting a small thing like a pandemic get in the way of training and inspiring the juniors.

Some of the Cyclones managed to get some races in too and so the following awards will be going to:

With us now entering into 2021 and seeing the start of our TT’s, the first at Grafton this Thursday, we are looking forward to seeing some aspiring new talented riders appear in the awards in the future.

I look forward to seeing you all soon.

It was great to see so many ladies and girls participate in our club runs and our time trial events, some contenders for the trophies, and a great display of future talent

Thank you all for the continued encouragement you give me racing and also the support of the club members and committee in bringing the club kit and the club website to a reality.